The Well of Blood - A one page dungeon

You have heard worrying news about your friend Bolster the Giant. He is trying to fill a well with his own blood! He says he's doing it for his true love - and that he needs your help. The well isn't filling up properly. There must be a leak that needs to be plugged. That has to be the reason, right? Go down there and have a look. 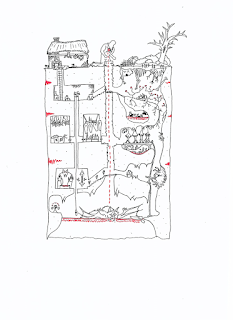 Here is my entry to the 2021 One Page Dungeon Contest. It features a twist, creatures both strange and familiar, tricks, traps, toys, magic-items, villains, a boat on a lake of blood, newfound allies, enemies who can become allies, a big jewel and more. The dungeon comes with a simple hook for one-shot games but can easily be inserted into campaign play with rumours of a blood-soaked and love-crazed giant offering gold for the assistance of adventurers. If you are a player, don't spoil this dungeon for yourself, close the page now.
Get the dungeon HERE
If you liked this dungeon check out my other bigger, more gruesome dungeon; 'Sulphur and Snuff' which is available on my blog. If you want to get more use out of the alchemy station featured in the dungeon, I recommend my 'Naively Simple Alchemy System'.
Special thanks to aseigo of the OSR discord and SquigBoss of Caput Caprae for their invaluable feedback and layout advice. 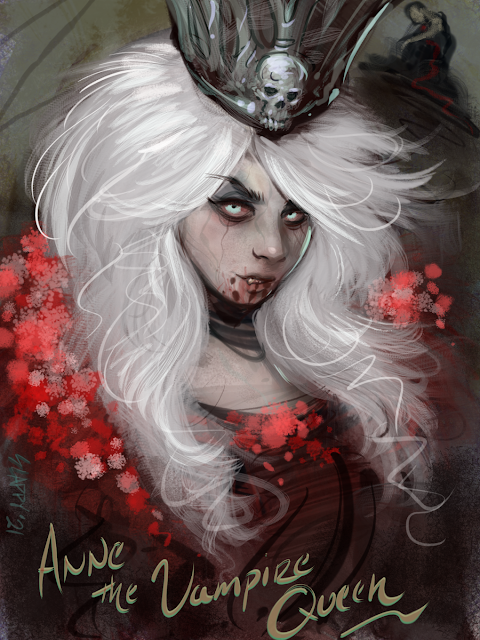 A truly fantastic piece of art sent to me by a fan of the dungeon, who said "I really enjoyed this. Here is a gift - not much. I wanted to depict Anne as a corrupt noble (poor giant) and as how a fantasy royal lady may look in funerary. Your dungeon is wonderfully peppered with solutions, problems, the absurd and the dark. It's whimsically dark!". I'm honoured.
Posted by Rook at 09:00 No comments:

Fantasy Names from Scrabble and Other Word Games

There’s nothing clever or original about this blogpost but it might help you to be clever and original.

Sometimes I lose games of Scrabble because I’m making up fantasy names instead of playing the game properly. I’ve used Scrabble, Upwords, Bananagrams and Bananagrams Duel (which uses letter-dice rather than tiles) to make names for characters, places, creatures - anything nameable for my campaign. You should do it also. Using actual game pieces works better than using purely random letters rolled up online as these word games are cleverly designed to have an interesting and useful distribution of letters as well as being much more manipulable + tactile. This fun little name-game is good because it forces you to create names you wouldn’t normally think of; names that are often outside the familiar linguistic phonemes and cultural naming conventions that you might be used to (especially if you get an unusual combination of letters). This cognitive jolt is good, an unforeseen prompt in a game of guided daydreaming. And a self-imposed 7 letter limit restrains your syllable count and helps ensure the name's memorability too - never use apostrophes.
I have used names generated using this method in my campaign. Names include Atzorig - a well-traveled, would-be conqueror leading the scant survivors of a rootless barbarian-folk, Yuban Yu - a red-white clad dignitary from the Southern Continent and the Tone-Men - a militant, copy-cat faction of martially inclined colour-cultists.
Posted by Rook at 18:47 No comments:

Email ThisBlogThis!Share to TwitterShare to FacebookShare to Pinterest
Labels: Ephemera

Mad Science, impossible to implement? Probably. Here’s my attempt. It is not play-tested yet. The system is recommended for gonzo, science-fiction and science-fantasy games
I made this as a personal challenge. In roleplaying games, the main problem with Mad Science themed mechanics is finding ways to deal with players possessing unlimited, free-form creative abilities - preventing deus ex machina, keeping game balance, assigning costs, construction times, listing resources needed, trying not to stifle player freedom. Hopefully, this system deals with those potential issues while keeping the process fun and creative for players, all while not ruining your campaign world too much. Still, this is a decadent system and feels like a first draft - I won’t even put it in my own game yet. I’d love to hear your thoughts and questions so I can amend and update this post and get it in a more realisable state. 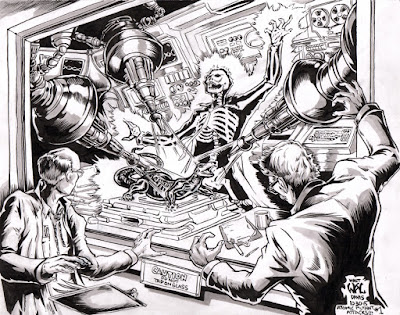 Overview
Mad Science is a downtime activity, from research to construction the process will always take 1 month and is accessible to all player classes. Mad Science must be performed in a laboratory. The end goal of the downtime is the construction of a Creation. This Creation is inspired by Ideas. Ideas are words that are randomly rolled and combined to form an initial Creation concept. Once the concept is decided upon, the DM can apply drawbacks to balance the Creation. Then resources and funds are gathered and the Creation is constructed. 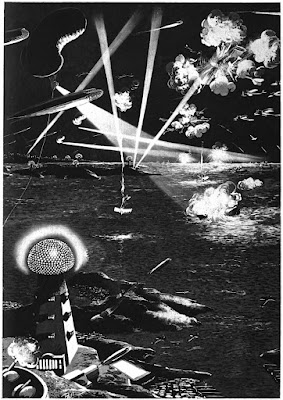 The first step of Mad Science is research. At this stage the Scientist is gathering Ideas and inspiration in his laboratory. The player rolls to discover what Ideas they will be working with. These Ideas will form the basis for their Creation. There is a d200 table of Idea words included alongside this post and here.
The base amount of Ideas to be rolled is 4.  This score is modified by;
+1 for each 1000gp invested in the Scientist’s laboratory
+1 if the Scientist is a Magic-User (or Specialist with 6/6 Tinker skill)
+/- the Scientist’s Intelligence modifier
At this stage the Scientist may also reverse-engineer a device/invention/thing to gain an additional Idea. An Idea specific to the thing being reverse-engineered. At its simplest, a laser-gun could be reverse engineered to produce the Idea laser or gun, a thermonuclear missile could give the Idea atomic or just bomb. This way the Scientist might be able to impart some direction into his Creation but they will have to go out and find a device related to the thing they want to create.
IDEAS - THE WORDS - HERE
There are 200 words here. Use an online number generator or use a d20 for the 100 die (with a result of 20 being 00) and a d10 for the tens and digits. These words are generic and intended for a fantasy or science-fantasy game. 50 words list possible forms for the Creation, 75 words are fantastic and the final 75 words are more scientific. Players should be encouraged to reverse engineer items they already possess to choose a bonus Idea. Rewrite this table to better fit your setting.
An Example. A Scientist rolls the Ideas; Implant, Blade, Ray, Disintegration, Gestate and reverse-engineers a necromantic magic item to gain the bonus Idea; Death. The Scientist combines the Ideas Death and Ray - Death-Ray - simple. Other combinations could be Blade-Implants, Blade-Disintegration-Ray... Death-Implant (a kind of cyanide pill?) there are many possibilities but only one can be selected and detailed. Idea words can be altered to a degree; plurals, synonyms, changes in grammar are acceptable. Unused words are forgotten. 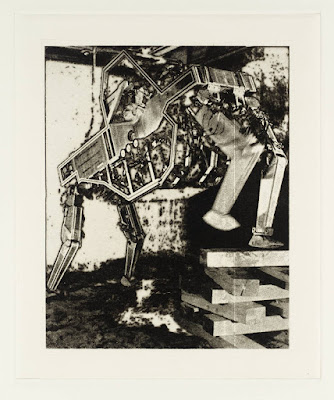 Once the Ideas have been gathered, the player combines two or more words into a concept for a Creation - anything that fits the Mad Science theme and it is logically derived from the words they have selected. Any unused words are forgotten. The player writes down the name of the Creation and a short description of what it is/its effects in as few words as possible. The mechanical bit comes during play.
Once the Creation is described the DM adds drawbacks. The drawback(s) must be worded in a way that uses half the word count of the Creation’s description (rounded up). This way, any Creation can be balanced by the DM. Drawbacks shouldn't render an invention useless but should hinder or wrinkle its usage in a way unintended by its creator. An unimpeded doomsday device, like a death ray could massively throw off a campaign - a huge, slow-charging death ray would throw off a campaign slightly less and prove more interesting logistically. A smoke bomb with the description 'explodes into concealing smoke' doesn't need so much of a drawback, 'really stinks' would suffice. For the sake of evenness, all inventions must have DM attached drawbacks, be fair and consistent - don't annoy your players but don't let your game be thrown out of balance either.
A simple example:
Creation name: Death Ray
Description: A gun that kills everything it shoots (7 words, half rounded up to 4)
Drawback: Colossal and charges slowly (4 words) 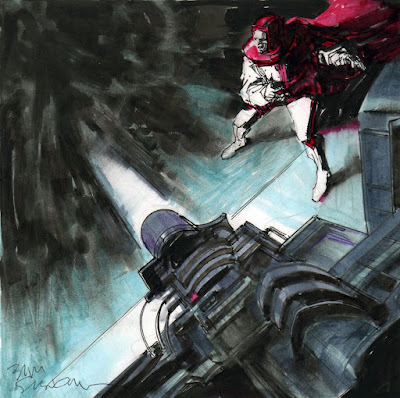 The final step is Construction. Prices and resource requirements are kept abstracted. The Mad Scientist needs patronage and connections, funding and resources for their Creation. This cost is always assumed to be beyond the current wealth and means of the player character, these things need to be gathered via secret dealings or public support. The fruitfulness of this resource gathering stage determines how the fraught the Creation's construction is. The inventing player rolls a reaction roll, adding their charisma modifier as normal. If the DM deems the Creation to be abhorrent, roll with a -2 modifier.
Construction Table
2: An angry mob forms, they want to destroy your laboratory, your Creation and you! The Creation is complete but under threat.
3-5: A mishap, a disaster! There is an industrial accident, the Creation goes rogue, turns out evil or is stolen. The Creation is complete but something must be done before it can be used - retrieved from a huge acid spill, from an exploding workshop, from a thief. Perhaps the Creation, if sentient, rebels against its creator. Perhaps the Creation fuses with the Creator?
6-8: Success, the Creation is completed without an issue.
9-11: Excess resources. Gain an additional word during your next mad science downtime.
12: Very successful. You have made 2 Creations rather than one.
Once this table has been rolled on, the downtime is over and the Creation (though it's status might be fraught) is complete and adventuring may resume. The DM determines the mechanical properties and effects of the Creation based on its description and drawbacks if necessary. 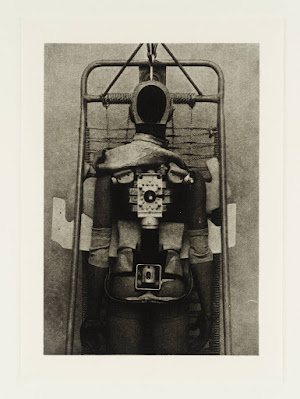 Other Rules
Assistants: For each assistant hired an additional copy of a Creation can be constructed per month of downtime. Assistants can also be used to create previously invented Creations of which the blue print is available. Assistants cost 100gp for each month of Mad Science in which they are involved and 10gp a month when otherwise maintaining the laboratory. Assistants cannot produce Creations without the oversight of a PC.
Not all devices can be mass-produced by lab assistants. As a rule of thumb, if a Creation is man-sized or larger and non-consumable only one of it can be produced per downtime. Many grenades can be manufactured but flying cars cannot be.
Laboratories: Laboratories should have everything a mad scientist would need - electrodes, bubbling vials, operating tables. They cost 10,000gp and 1 month to set up. It's easier and cheaper if the adventuring party just take one over. 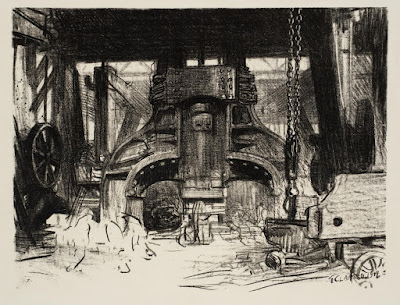 The Mad Science Process - takes 1 month
1. Roll 4 Ideas/Words. +1 word if Magic-User, +1  for each 1000gp invested in the laboratory being used, +/- intelligence modifier. +1 bespoke Idea if player reverse-engineers something.
2. Combine 2 or more Ideas into a Creation concept
4. Describe what the Creation does, keep the word count low.
5. DM applies appropriate drawback(s) to the Creation using half the word count of the Creation’s description (rounded up)
6. Roll on and consult the Construction Table (2d6+CHA modifier, -2 if Creation is abhorrent)
7. The Creation is complete.
8. (?) Deal with the resultant situation caused by a low roll on the Construction table. 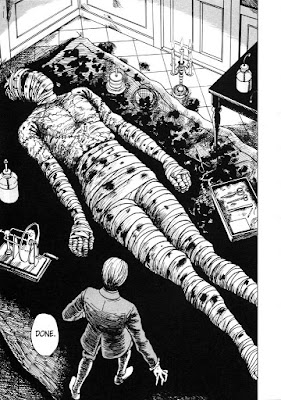