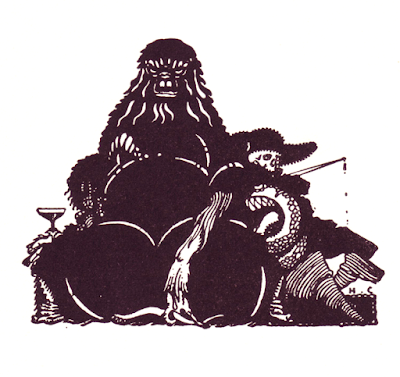 Description: When ignoble men of immense wealth succumb to impermissible
hedonism and occult greed they degenerate into a blackened mass of cloying
gunge - Embonpoint Princes. They greasily lounge in their oozing excess as their
domains decay and their cruelty grows, whiling away their unnatural lives supping
on fine wines, sickly-sweet meats and the frightfully thrilling taboo of human
flesh. Embonpoint Princes are pawed on by a host of wickedly obsequious and
emaciated attendants, deluded and desirous of their own transformation into an
Embonpoint Prince.

Special Abilities: When smelled Save vs Paralysis or become intoxicated by the
heavy hazy sweetness that sweats and beads from the Embonpoint Prince. When
enthralled by the excessive smell begin to stumble towards the Embonpoint
Prince rerolling the save only if someone attempts to wake you. When you come
into contact with the Prince become stuck into it’s black lardy slime as an ant
might be stuck in honey. As soon as you become trapped you wake from your
stupor. Each round Save vs Poison to avoid taking 1d6 points of damage until you
are freed or dissolved. The Prince may freely chew upon any victims it has
trapped dealing 1d4 damage. This effect lingers on after the death of the Prince.
An Embonpoint Prince’s attendants are acclimated to it’s stench and are not
subject to its effect.