Low Fantasy. Magic is rare. Those that wield magic are burnt at the stake or revered as cult-lords. How to simply represent this through your game's mechanics? 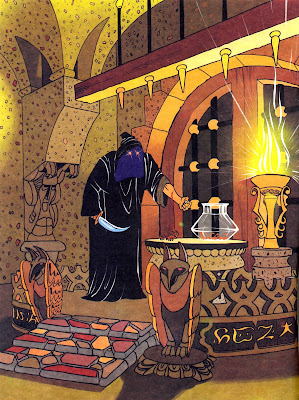 Immediately reroll any NPC's reaction after a character uses magic in front of them for the first time. This means a group of initially friendly peasants can start to reach for their pitchforks when they see a PC casting spells or a gang of brigands can become hospitable (from fear of being obliterated by a powerful sorcerer). It is your discretion whether to include the magic-wielder's charisma modifier in this roll.

Rerolling reactions should only be done once and only for appropriate NPC's. A group of hardened adventurers or the king's finest veterans probably wouldn't reroll reactions, they are too experienced or brave or loyal to do so. Likewise, non-sentient creatures (undead, automatons) are unaffected as are NPC magic-users and many (but not all) dungeon denizens. Cultists should only reroll reactions if the PC's do magic more impressive than their cult leader is capable of.

To simulate more intensely inquisitorial, witch-hunting societies reroll reactions with a -2 or -4. An average reaction roll indicating a certain fearfulness or anxiety in the NPC's. Positive magic could mean the reaction roll is made with a +2; despicable magic with a -2.