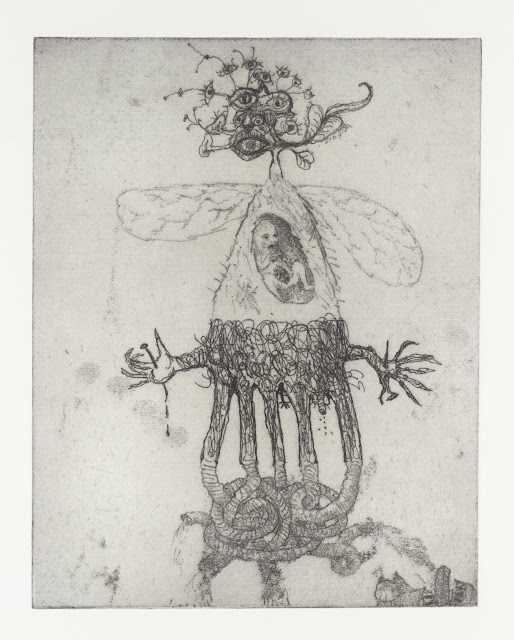 Fleeing to the material plane from the imperious yoke of the cyclopean fortress-city of Kadath, the surreal beings of the Dreamlands are often found among adventuring parties, who are more permissive of the Dreamlander’s chimerical form and convoluted, remote intelligence.
Find the PDF here

As a Racial-Class
HD: 8
Saving throws: As Magic-User
Attacks: As Cleric/Thief
Base XP: 1800
Details on progression below.

Generating a Dreamlander
A Dreamlander is formed from the base ichor of the trances, delusion, fears and dreams of the mortal world, they are composed of freakish amalgams of dream imagery threaded together in increasingly bizarre combinations.

The procedure to generate a Dreamlander is such; take 1 die of each type (d4, d6, d8, d10, d12, d00, d20) in a clenched fist.  Place your fist upright against a flat sheet of paper and release your grip so the dice fall into a small group.  Draw around where each die is positioned on the paper, noting both which die it is (d4, d8 etc) and the number your rolled. Consult against the tables below and record the different parts of Dreamlander, writing them onto your character sheet. Once this is done, you can begin to work out the appearance of the Dreamlander, what is the body shape? What way does the Dreamlander face? When you think you have a good grasp on your character’s appearance it is advised that you sketch them out. You will find some examples of this process in the PDF. When the character is complete think of the many opportunities and talents your new form allows (some examples are listed in the following tables in brackets).

The Dice and their functions:
Each die governs a particular body part or appendage while others apply effects to the Dreamlander in part or whole. Some die will help define the shape of the body and will be made of whatever substance you rolled on the body table.

D4: governs size and helps define the shape of the body.

D00: The d00 applies an effect to another die it is touching (if it is touching multiple die, you choose which die it effects) and defines shape of the body.

D20: Governs an appendage or feature

Drawbacks
As the Dreamlander gains so much at first level they begin with a significant drawback.
All Dreamlanders are out of step with the magic of the material plane. The positive effects of spells are halved for them and the negative effects (including damage) are doubled.

Author comments:
The Dreamlander is meant to be a freakish, swiss-army knife character. I don’t know how playable they are or if they would serve better as an NPC class. I have never made a class before so please let me know if I have excluded anything or if it is all just terribly wrong.

I am proud of the method of generation, I think I came up with it myself! I also think it has a lot of potential, the system can be used to generate many other monstrosities and could be quite easily hacked into something more comprehensive (you could use multiple d20’s of different colours for instance) although I do have another post in the works using the same system for a different outcome.