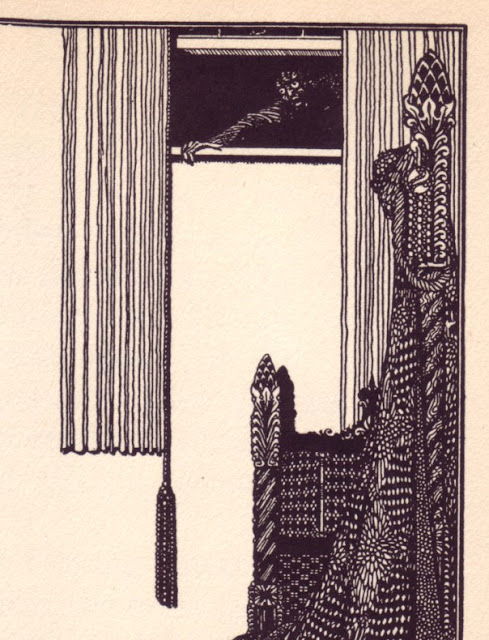 While writing this monster I was reminded of this scene from David Lynch's Mulholland Drive.
It's difficult to pull off a monster 'that's so scary you die' at the table. I make reference to the creature's distinct sounds, if you can bear to attempt guttural disjointed chortling you'll definitely succeed in making your players (if not yourself) uneasy.

Description: Midnight Crawlers were once long-forgotten lunatics and ragged half-men. Having undergone a demonical change, becoming an entity of death-dealing fear they now aspire to use their horrifying influence for their own ghastly amusements. Their only delight is their simpering malice which they can inflict on the unbeknownst innocent.
Many a household have been torn down in raving fits of wild screaming-death by the Midnight Crawlers. When a manor’s inhabitants have died of fright, simply from a glance through the window at soulless leer of a Midnight Crawler, it will squirm it’s way inside. There it will cavort lopsidedly - moaning in gibbering reverie; a wildly wheeling dance of brassy chortling and stuttering, gurgling giggles.
When the sun sets bar your door. Ignore the rasping breath and the sly tapping at your window pane for only the heartiest, bravest souls may endure the wracking pain of a Crawler’s terror.

Abilities: Anything that sees the creature will take d10 points of fear-damage directly to it’s HP. This fear-damage decreases by a die size each subsequent round an individual is exposed to the Crawlers, a victim becomes immune to this effect when the effect is reduced below d4 fear-damage. So terrifying are the Midnight Crawlers that if it does more damage than it’s victim’s HD, the victim can only inflict a maximum of 1 hp’s worth of damage to the Crawler regardless of the type of attack. Multiple Midnight Crawlers do no inflict multiple fear attacks, each Midnight Crawler adds +1 damage to that rounds fear-damage dice.
When everyone has succumbed to the Midnight Crawler it will enter the space and begin it’s ungainly, impish dance until interrupted. It’s laughter, when heard, deals 1d4 points of fear damage.