Aliens. Here are three race-as-classes based on different varieties of supposed alien species. The classic ‘Nordic’ or Pleiadean type, the Men in Black and the infamous Reptilians. These classes are not just suitable for Science-Fiction and Science-Fantasy games and could easily be used in more typical fantasy, weird tales or pulp games. The Pleiadeans become Atlanteans or inner-earth Agarthans, The Men in Black become Bogeymen and the Reptilians become Robert E. Howard's Serpent Men.

Tall, blonde and benevolent. Pleiadeans are physically and mentally superior, a perfect race. Vain and unintentionally sinister, the Pleiadeans appear devoted to peace, progress and enlightenment for all sentient life.

Special: All stats must be 11 or above

Perfected Beings: Pleiadeans are biologically capable of physical and mental perfection. Every level increase a modifier of your choice by 1 to a maximum total of +5. Your actual stat does not increase in size or number.

Telepathy: Pleiadeans are capable of two-way telepathy with beings they can see. They can communicate via known languages or share emotions.

Controlled Biology: Pleiadeans have conquered the mortal condition and suffer no penalties from ageing and receive +2 on saving throws vs disease.

Man In Black or Bogeyman

Men in Black or MIB are peculiar beings with uncanny faces. Beings in dated black formalwear. No one knows what they are doing, who they are or what they want, but they have something to do with the lights in sky. They are creatures of unreality and chaos. They may not even exist outside of our minds.

High Strangeness: A number of times per day equal to your level unleash High Strangeness. Each time, roll 2d100 on the High Strangeness table, present the two words to the DM. You and the DM then combine these words to affect the current scene or your character in some wild, strange, dreamlike fashion. These effects last an amount of time depending on their potency. Potent effects last a round per level and less potent changes as long as the MIB is present. The words can be interpreted in any order and some need to be specified by the player, such as colour or emotion. Some results may be cerebral or silly. Always go with your first instincts to ensure pace. Not every effect is useful.

Effects could be strange objects pulled from pockets, things or people summoned from the sky or the shadows. Effects could be mental or physical - real and imaginary. High Strangeness can target the MIB, someone else or sometimes everyone (if in doubt select randomly) or they can change the environment or things within the environment. Theoretically anything is possible.

This High Strangeness ability is also triggered whenever a MIB is critically hit, reduced to 0 HP and on character death.

Grey: At 9th level your poor human pretences fade away. You are no longer a Man in Black but a Grey. You shed you black clothing revealing a grey spindly body, beneath your hat is a grey bulbous head in which are embedded two wide and cold black eyes. You can change height at will being either lanky and tall or as short as a halfling.

Telepathy: From 9th level a Grey is able to speak telepathically with any sentient creature within its line of sight but is no longer able to speak verbally.

Pretend Person: Nothing about an MIB is real, their human disguises are poor and knowledge limited. MIB’s do not need to eat, drink or sleep but can attempt to do so if they wish. The result is stilted and unnatural – a bad act.

Unnatural: Men in Black spook animals and suffer -2 to reaction rolls with them.

Find the High Strangeness table in the PDF linked to above or HERE. 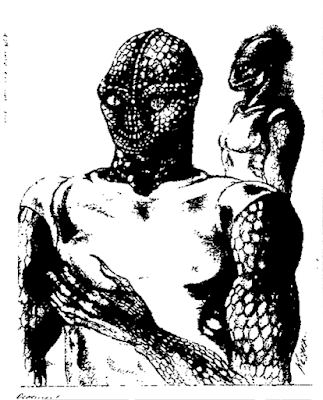 Hailing from beyond the stars or deep within the Earth, the Reptilians are a primordial race. Ancient, even when men first began to emerge from apedom. A powerful and distant species with a cold and sharp intelligence, the Reptilians are masters of the material and immaterial and using their shape-changing abilities they have infiltrated the highest rungs of human society. Their only weakness; their insatiable dependence on blood.

Alien Biology: Reptilians start with a +1 modifier bonus to Strength and Intelligence stats.

Shapeshifter: Reptilians start with one alternate human form; this form is unique. On every third level (3rd, 6th, 9th) the Reptilian receives an additional human form. These additional forms must be copies of existing people the reptilian has seen. The Reptilian can shift between these forms at will.

Claw attack: Whilst in its reptile form, the reptilian can slash with its claws for 2d4 damage.

Hated: When in reptile form, Reptilians suffer -2 to reaction rolls.

Blood Magic: Reptilians start with 1 spell and gain 1 spell per level as a magic-user of the same level and an equal amount of spell slots. These spell slots can be used in two ways. Whenever spell slots become available the Reptilian can bind a known spell (they bind a known spell any number of times). For each spell slot currently bound a Reptilian gains +2 HP and +1 to their attack bonus. When the spell is cast this bonus is lost.

Reptilians do not regain spells like other spellcasters. To regain lost spell slots a Reptilian must drink the blood of sentient creatures. One spell-slot is regained per HD of the creature being drained. You cannot regain more spell slots per day than your current level.

Haemovore: Reptilians can consume blood instead of rations.